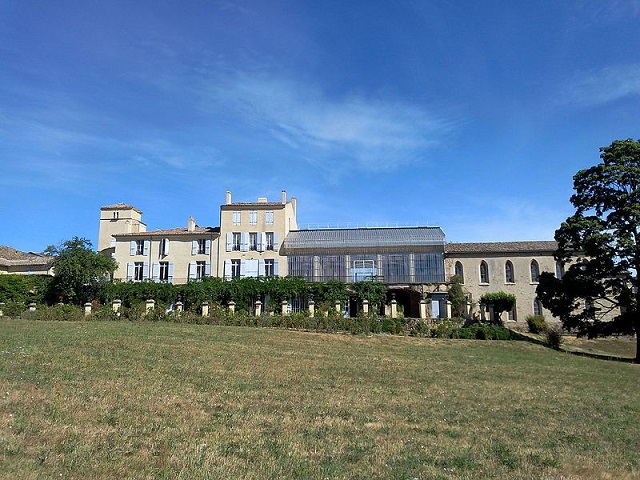 Location: Annonay, in the Ain departement of France (Rhone-Alpes Region).
Built: 12th century.
Condition: --.
Ownership / Access: --.
Notes: The Domaine de Marc Seguin, called Varagnes, is a group of buildings located in Annonay, in the department of Ardèche in France.It is customary to think that "Varagnes" comes from the term "varagner", which would mean gleaning. It would be a place where people could pick up what had not been harvested by the farmers. In fact there are many places with this name in the south of France (see in particular the Gallica site of the BNF) which have different meanings. It is the residence of the Chomel de Varagnes who lived there from the 11th to the 18th century. In 1858, Marc Seguin bought Varagnes d'en Haut from Mathieu Duret, his father-in-law (mayor of Annonay). Marc Seguin is almost 75 years old and wants to return to Annonay, his hometown. He spent close to thirty years at the Abbey of Fontenay and became more and more uncomfortable with Burgundian moisture. He also wanted to pursue studies in astronomy and looked for a very open area from east to west and within a reasonable distance from the center of the city. He then transformed the remnants of a strong house to pursue scientific and cultural activities during his retirement and in so doing, make it a place of reflection and creation. It is not only a matter of earthworks and the construction of a double-walled greenhouse that is a copy of the one at Fontenay (destroyed since then), but also of creating an observatory, mechanical and chemical workshops, a library , A painting workshop, a chapel, a forge, a carpentry, a wash house, a revolutionary dryer, etc. Marie Hélène Reynaud in her book on Marc Seguin describes Varagnes: "The Park, very well designed, hides [Varagnes] from prying eyes and gives the necessary tranquility to the seeker. From the courtyard, closed on three sides, the Alps are seen in clear weather. Stairs facilitate the journey of the masters, but also gardeners who prepare the flowers in the greenhouses. Visitors discover with astonishment the famous sea bath: one bathes in the salt water to which rotating palettes give a movement of waves. The orange trees lined up on the terrace reach the immense winter garden. As for the chapel, Marc Seguin planned great, three hundred people can attend the Mass celebrated by a chaplain. During the frost, guests are not obliged to go out. Seguin thought of everything; Via the gallery, the chapel communicates with the winter garden ". Marc Seguin did not want to build a castle: "I built Varagnes for twenty years, time to die here. I hope that at once you will throw these walls of evil mortar to have the joy of rebuilding. " The walls were not slaughtered even though Varagnes suffered from a lack of care after the death of Augustin (son of Marc) until 1992 when Valérie Seguin Lefèvre, a descendant of Marc and Augustin Seguin , And her husband undertook to restore this home.