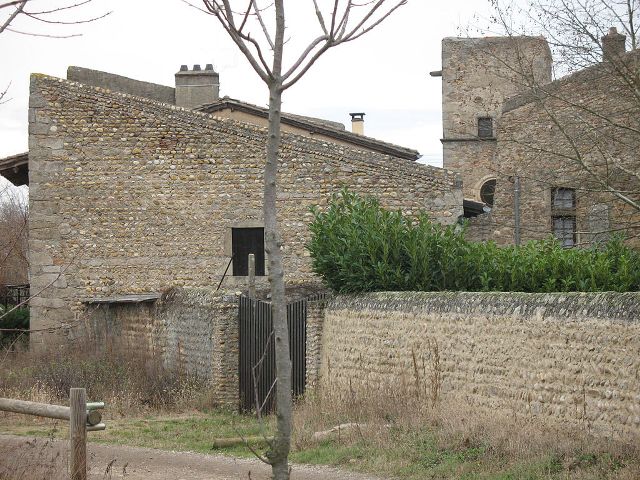 Location: Vourles, in the Rhône departement of France (Rhone-Alpes Region).
Built: 16th century.
Condition: In good condition.
Ownership / Access: Privately owned.
Notes: Maison forte d'Épeisses, formerly known as the legs, is located in Vourles in the Rhône department, on the right bank of Garon.The main building and outbuildings form a quadrilateral arranged around a small courtyard. There remains a door surmounted by a square tower, all dating from the sixteenth century. The fortified house is private property. She did not visit.Around the year one thousand, Epeisses owned hospital brothers. In 1314, the land becomes a stronghold for the benefit of Lambert Parent; until the Revolution, this feud will be part of the parish of Orliénas. In 1366, a title attests to the existence of the castrum of Piscibus. The Faye family owns the land from the fifteenth century to the early seventeenth century. Include: 1500, Pierre; to 1528, Jean who married Jeanne Clavel in the middle of the sixteenth century; Peter, son of the previous wife who Méraude Paterin until 1581 and Bartholomew (???? - 1581), son of previous president to queries that wife Mary Viola. Its singular death is reported as "[the] good man of Mr Espesses, to Estre endormy in his chaize in his office, fell into the fire without being able to meet and him alone, is dead." Their son Jacques (1543-1590), magistrate, president of the Parliament Paris who married in 1576 Francoise de Chalvet, Fréluc lady then inherits his son Charles, Baron Trizac, adviser to the Parliament of Paris, Master of queries, ambassador Holland, state councilor; he married in 1617 Charlotte Fourcy and died without issue. Other owners are attested: Prost family in the seventeenth century, Pierre Joseph Allery in 1699, Marc Antoine de Randin, infantry captain in 1721 and Louis Pravieux Blanchet (1697-1763) until 1753 Pierre Mermier, esquire, counselor of the king, lord of Moleise until 1772 (brother of Anne Nicolas Mermier, secretary of the king, Receiver General of aids and grants from the city of Lyon, Lord of Lissieu). The latter sold the estate to Charles Riboud, Lyon, which performs restorations. The house is home to a farm. In the 1900s, this fortified house was divided gradually to become the dwellings; the twenty-first century, 8 families live there.