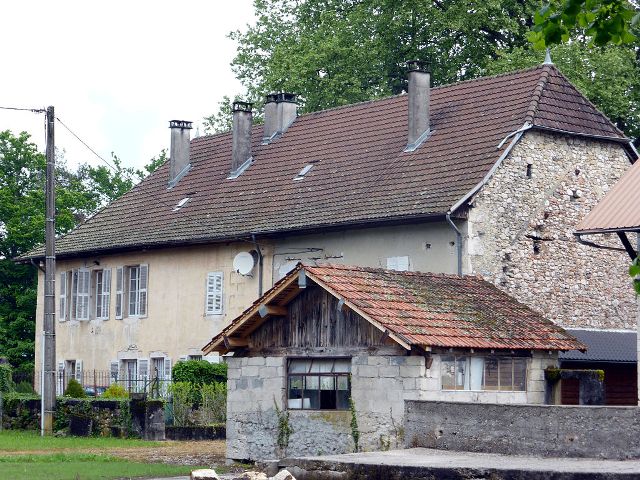 Location: Yenne, in the Savoie departement of France (Rhone-Alpes Region).
Built: 14th century.
Condition: In good condition.
Ownership / Access: --
Notes: The Maison forte de Cummugnin is a former stronghold of the fourteenth century, in the Middle Ages, seat of the lordship of Cummugnin, whose remains stand on the commune of Yenne, a French commune in the department Savoie region Auvergne-Rhône-Alpes. The stronghold of Cummugnin is the fourteenth century, the possession of the House of Savoy; Count Amadeus VI of Savoy enfeoffs in 1348 to Georges du Solier. The count had received after the death of John of Savoy, Archbishop and Comte of Lyon. In 1359, it is in the hands of Pierre de La Mar. Jean de La Mar (Mari), Lord of Cummugnin, writes in the tower of the fortified house of Cummugnin, August 5, 1438 his will and asked to be buried with his family, in the family tomb in the abbey 'Hautecombe. Before dying, he made a bequest to the poor Yenne. The December 1503 July, the widow of Étienne de La Mar, Lord of Aymavigne and Cummugnin, which has guardianship of minor children, sold by deed done in the stronghold of Cummugnin (Apud Cummugninum), meadows located under the strong house, the Curia, the localities to "Meline water" and "Réclosière" (aqua mellione and in reclusarium). Sébastien de La Mar, lord of Cummugnin is, in 1610, captain chairs Allinges (Chablais), and no longer resides in the strong home Cummugnin. In 1730, the land is the possession of noble Francis de Hauteville Yenne. Joseph Hauteville, who died in October 17923, leaves his brother, Claude de Hauteville, major of the city of Cuneo (Piedmont) as heir; the latter being regarded as emigrated then, the land and the fortified house were sold as national property. After the Revolution, the land was the property of the families Burdet, Dupasquier, Heir and Perrier. Ms. Perrier, born heir, widow of Antoine Perrier, senator, has the property in 1907