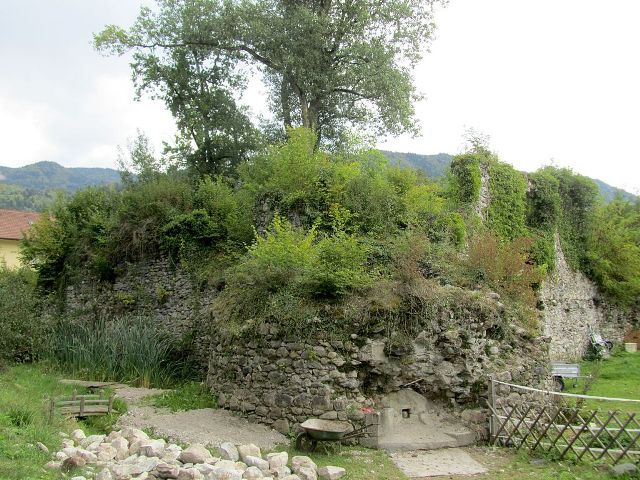 Location: Perrignier, in the Haute-Savoie departement of France (Rhone-Alpes Region).
Built: 14th century.
Condition: Ruins.
Ownership / Access: Privately owned.
ISMH Reference Number: PA00118473
Notes: The Maison forte de Cursinges is an old fortress of the fourteenth century, located in the eponymous hamlet, the ruins stand in the town of Draillant in the department of Haute-Savoie region Auvergne-Rhône-Alpes. The ruins of the fortified house subject to registration as historical monuments by order of 16 July 1990. The strong Cursinges house is typical of fortified houses of the fourteenth century, see also in the same department of the fortified house Buffavent and strong house Brens. The stronghold of Cursinges comes in the form of a square enclosure trenched by 30 meters wide flanked at the corners with round turrets. The embattled curtain, with a thickness of 1.20 meters, Used to connect two buildings, with a large and a small square tower, contained two courses. Two drawbridge allowed to step over large ditches flooded by a derivation of Redon. The successive floods end of the ruined tower fell and the ditches filled up. Today, one can still see in the vegetation remains of large sections of wall still marks the location of the fortified house of Cursinges.