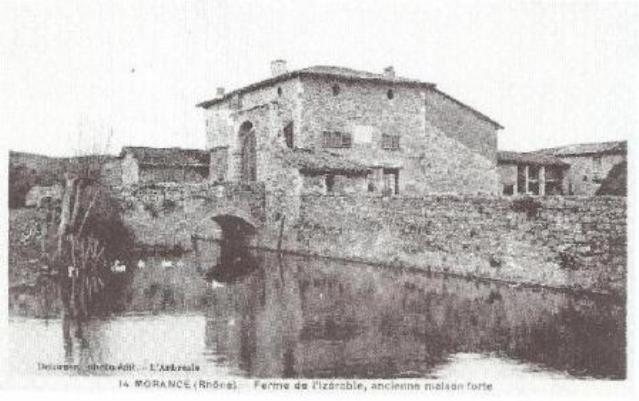 Location: Morancé, in the Rhône departement of France (Rhone-Alpes Region).
Built: 13th century.
Condition: In good condition.
Ownership / Access: Private property.
Notes: The stronghold of Isérable is a former stronghold trenched, the thirteenth century, which stands on the town of Morancé in the Rhône department in Auvergne region Rhône-Alpes.The stronghold of Izérable dates back to the thirteenth century. In February 1262 Chalenda of Izerable actually homage to Abbe d'Ainay. In 1467 it is possession of Hugonin Thélis and in 1477 the powers of justice on the lordship passed to the Canons-Counts of Lyon. In the seventeenth century the Dugué family bought the castle; Gaspard Dugue, who also owns the Chateau de Bagnols, is treasurer of France. In this family, succeeds that of Chapona in 1680; Octavian (-1720), knight, king honors for the fief of Izérable; He married Louise de Loras, in 1717. Their son Gaspard (-1731), knight, king honors for the fief; he married Mary Baglion and their son Peter Knight, Marquis of Chaponay wife Marie Anne of Areste. Pierre Elizabeth Knight, Count of Chaponay, their son and successor, pays tribute to the king for his land in 1779. With his wife Suzanne Nicolau has a son Pierre Anne (1754-1832), Knight, Marquis of Chaponay-Morancé, which Good wife Marie Antoinette Durand; it is the first page of the Comtesse d'Artois, then cavalry lieutenant colonel. Today, the area is a farm.The original building was home to perhaps a leper colony. From the imposing entrance, the thirteenth century remains only the bridge over the moat. The buildings are part of a quadrilateral which defines a farmyard and northeast top of which stands a round tower. Southwestern house has mullioned windows. Small round openings have been created in the attic.