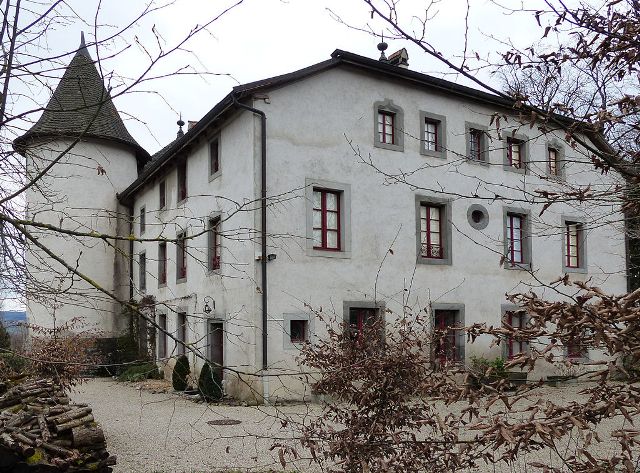 Location: Bonne, in the Haute-Savoie departement of France (Rhone-Alpes Region).
Built: 15th century.
Condition: In good condition.
Ownership / Access: Privately owned.
ISMH Reference Number: PA00125743
Notes: Maison forte de Loëx or castle Loëx originally fortified house stands on the common good, in the Haute-Savoie.Strong Loëx house was the center of the Lordship of the family that bore the name and who kept possession until the fifteenth century. The first mention of this family appears to us in the thirteenth century. A Stone Loëx, is cited as co-lord of the stronghold. It is sold to Louis Machard. In 1561 Philibert La Forest4 buys the stronghold; it will remain in the family until 1693, when Janus or common Bellegarde in jeans Noyel acquisition. In the seventeenth century Balthazard Machard Chassey is in possession of the "castle". The branch of the Machard Chassey keep until 1813, before falling to the branch of Machard of Chillaz. By inheritance, it passes in 1827 to Baron Alexandre Bouvier d'Yvoire, this will keep the family until 1955, and then sell to Mr. Boudet. Both pieces decorated with murals located northwest of the first floor of the castle were included in a historic monument by decree of 22 June 1993.It consists of two buildings in the square, a round tower and another square.