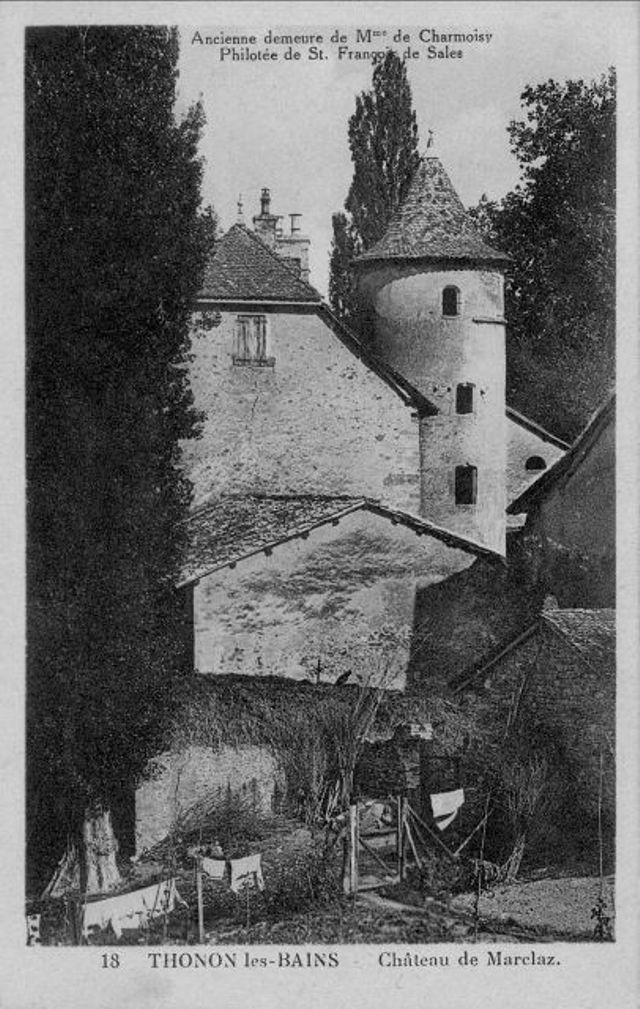 Location: Thonon-les-Bains, in the Haute-Savoie departement of France (Rhone-Alpes Region).
Built: 15th century.
Condition: --
Ownership / Access: --
Notes: Maison forte de Marclaz is a former stronghold of the late fifteenth century, located in the eponymous hamlet in the town of Thonon-les-Bains a French commune in the Haute-Savoie region Auvergne-Rhône-Alpes. In the Middle Ages, it is the center of the lordship of Charmoisy and Marclaz. The castle is the subject of a registration as a historic monument since July 12, 1995.The manor, which depended Lauzenettaz, Dursilly, Anthy, Corzent ... is the possession of the family of Ravais. It passes through the marriage of Gasparde Ravais in 1515 to Chaumont vidomne which gives rise to the branch of vidomne Charmoisy. The stronghold is devastated in 1589 during the war between the Duke of Savoy Charles Emmanuel firstly in Geneva and the king of France on the other. In 1600, Claude vidomne of Charmoisy son of Charles vidomne wife Louise of Châtel, Norman, who will Philotée of St. Francis de Sales in his correspondence published under the title "Introduction to the devout life." The latter will stay several times at Castle Marclaz. The fortified house through marriage in 1659 to Victor Amadeus Mareschal of the Valdisere the manor was erected in marquisate in 1671. The last of this family, Henri de Mareschal of the Valdisere bequeathed in 1795 to Josepthe Seyssel-la- Charniaz, niece of his wife Henriette Pelard Epagny, which transmits it to the knight Carron, her husband. At his death, the fortified house passes successively Lady May and Madame de Ville, Josepthe sisters Seyssel la Charniaz. It is sold to Baron Chanteau.