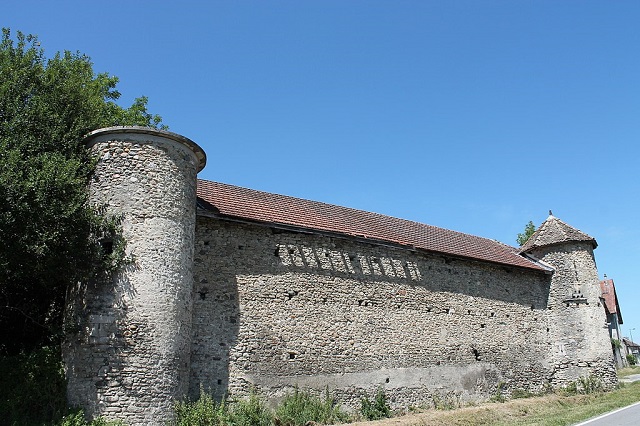 Location: Menthonnex-sous-Clermont, in the Ain departement of France (Rhone-Alpes Region).
Built: 14th centurry.
Condition: --.
Ownership / Access: Famille de Mionnaz.
Notes: The stronghold of Mionnaz is an old stronghold of the beginning of the fourteenth century, center of the lordship of Mionnaz, which stands in the eponymous hamlet in the commune of Menthonnex-sous-Clermont in the department of Haute-Savoie in Auvergne -Rhône Alps.In 1278, the stronghold was owned by a damoiseau, then by the family of Mionnaz known since the beginning of the fourteenth century. In the second half of the fifteenth century it was the possession of noble Pierre de Mionnaz, squire and headmaster of Prince Jean de Savoie. By marriage she passed, in 1543, in the hands of the family of Montfort, then in 1730, to the family of Chabod of Saint-Maurice. In 1835, it is the possession of the family of Grenaud.The stronghold of Mionnaz shelters behind a high wall of masonry enclosure, pierced by a carriage door vaulted in basket handle and a pedestrian door, surmounted by machicolations on consoles; Only the latter remain. The west wall adjoining the road is framed by two round towers. This set was completed with a fourth round. The fortified house is in the form of a vast two-storey quadrangular building. The wood of the joists of the ceiling of the low room dated by dendrochronology places the slaughter of the woods between 1325 and 1335. On the ground floor, the main building houses a coffered fireplace and probably a chapel. A vegetable garden has been built inside a bay. In the middle of the facade, illuminated by large windows with mullions on the courtyard side, a round tower, shelters a staircase with shell. It was flushed to be able to include it under the same roof as the house.