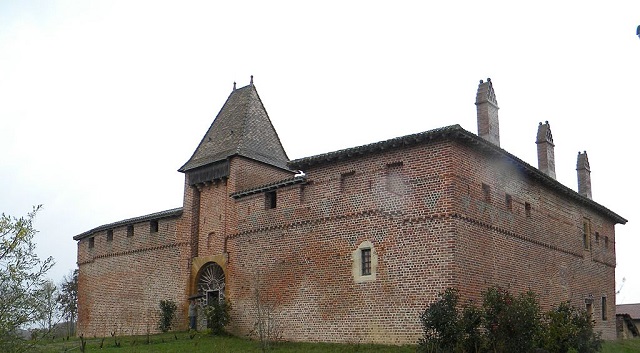 Location: Villeneuve, in the Ain departement of France (Rhone-Alpes Region).
Built: 15th century.
Condition: --.
Ownership / Access: Sires de Villion.
Notes: La Maison forte de Villon is an old fourteenth-century stronghold, the center of the lordship of Villion, which stands on the commune of Villeneuve in the department of Ain in the Auvergne-Rhône-Alpes region. The fortified house was classified as a historic monument by a decree of 16 October 1992.The lordship with castle was originally the possession of the gentlemen who bore the name. Of their family were Arthaud de Villion, living in 11503, Gui de Villion, knight, in 1263-1274, Stephen, in 1295, etc. In 1490, this seigniory belongs to Guillaume de Lyareins or Glareins, and, in 15303, to Jeanne de la Teyssonniere, widow of Pierre de Saint-Trivier, knight. Philibert de la Teyssonniere, squire, lord of Villion after Jeanne de la Teyssonniere, left a daughter, married to Louis de la Baume, count of Saint-Amour, who sold her to Jean Godon, lord of Graveins (Villeneuve) First president in the parliament of Dombes. Anne de Godon, the only daughter of John, marries Philibert de Naturel, squire. Claude and Nicolas de Naturel, his sons, alienated him to Claude Valeton, alderman of Lyons, father of Jeanne Valeton, married in second marriage to Guillaume de Sabran, equerry. On May 30, 1606, Villion fell to Louis Austrein, father of another Louis Austrein, an adviser to the parliament of Dombes, whose sole daughter, Marguerite, married Claude-Charles d'Apchon. Villion was afterwards united to the barony of Fleches (Fareins). Pierre de Sève, Baron de Flécheres, gave it to his Gabrielle de Seve on June 17, 1737, marrying her to Marc-Joseph Pourroy of Lauberiviere de Quinsonnas, whose family still enjoyed it in 1789. The castle of Villion was taken by assault, in 1378, by Count Amedee VII of Savoy. In the seventeenth century there still existed within its walls a chapel endowed with a rent of 50 livres, charged by three masses paid by the parish priest of Agnereins, who was then the parish of which Villion was dependent.