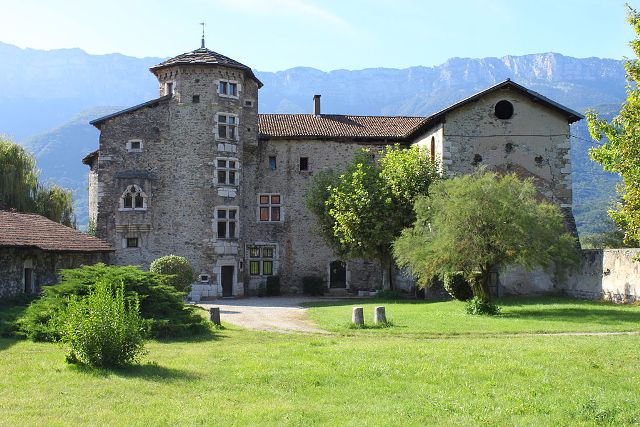 Location: Le Cheylas, in the Isère departement of France (Rhone-Alpes Region).
Built: 15th century.
Condition: In good condition.
Ownership / Access: Privately owned.
Notes: Manoir de la Tour is a former fortified fifteenth of XVI century, which stands on the town of Cheylas in the Isère department in Auvergne region Rhône-Alpes. The mansion is the subject of a partial registration as a historic monument by decree of 18 July 1951. Only the facades and roofs are enrolled.The vault is in good condition. A stone covers a hole, according to the ancients, could be what remains of the dungeon. On the ground floor, we note the location of "guns" and, curiously enough, a shot sealed in the wall that would be an esoteric symbol of the era. Upon entering, one discovers a beautiful spiral staircase serving the floors. On the ground floor, do not miss to enjoy the French ceiling of the room the kitchen. One room has beams made of three parts, working local carpenters whose fame exceeded our borders. The guardroom communicated through a walled staircase today, with a police room, located in the tower, in the chapel. On the same floor are located the rooms. The one in the south facade was a bridal room, judging by the two hearts carved in stone mullions, tribute to the sculptor of the young couple. Common built in the eighteenth century surround the courtyard. One of them contained a silkworm (raising silkworms) built under Louis XIV. The mansion is the subject of a registration as a historic monument since July 18, 1951.

How To Get To Manoir de la Tour (Map):