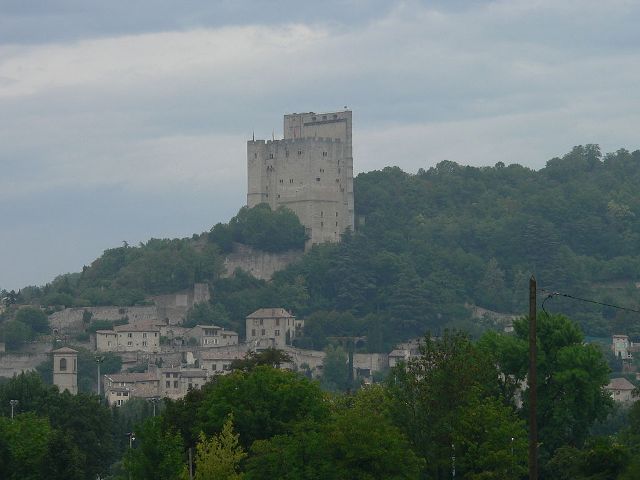 Location: Crest, in the Drôme departement of France (Rhone-Alpes Region).
Built: 10th-14th century.
Condition: In good condition.
Ownership / Access: Owned by the municipality.
ISMH Reference Number: PA00116924
Notes: Tower Crest, imposing vestige of up to 52 meters in height Crest castle in Drome (Auvergne-Rhône-Alpes), is, with that of Vincennes, one of the tallest towers in Europe.In 1394, the Castle Crest has a large square tower in stone. In the fourteenth century, the old Romanesque tower has been doubled. Richelieu on the orders of Louis XIII made destroy the castle Crest of which only the massive tower overlooking the town of Crest. The upper galleries of the dungeon, defensive originally turn into prisons succeed each other Protestants, freethinkers, republicans, ordinary prisoners, opponents of the Second Empire, until 1873. The walls are covered with hundreds of graffiti detainees. It will, as such, called "South Bastille." The Crest tower was listed building on June 6, 1877. Since 1988, it belongs to the city of Crest that allows tourists to visit.

How To Get To Tour de Crest (Map):