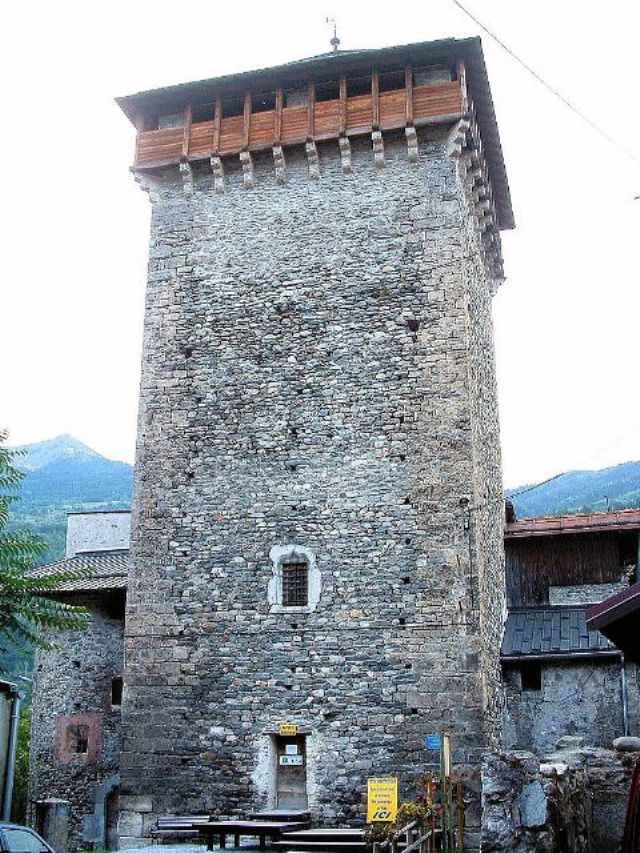 Location: Aime, in the Savoie departement of France (Rhone-Alpes Region).
Built: 14th-16th century.
Condition: In good condition.
Ownership / Access: Privately owned.
Notes: Tour de Montmayeur is an old fortress of the fourteenth century, which stands on the town of Aime in the Savoie department in Auvergne region Rhône-Alpes. The tower is the subject of a partial registration under the Historic Monuments by order of 21 August 1983. Only the dungeon and the home are inscribed.The tower was part of a defense system to protect the town of Aime. It was connected to the tower of Maney, a square tower, built on the other side, the other side of the bridge over the ormente and round tower Poëncet, behind the pavilion religious, under the Tessens road, all under the protection of the castle of Saint Sigismund. The tower is mentioned in 1392, when Claude Montmayeur receives the allegiance, then, in 1447, when Humbert sirs Montmayeur and his brother Claude Montmayeur are invested.According to the instructions for the base Mérimée, the oldest elements of the castle date back to the thirteenth century. A rectangular enclosure flanked by round towers at the corners then enchemisait strong house that seems to date from the fifteenth century. The latter consists of a rectangular house flanked at its center on its longest mistress a square tower that dominates. The keep is 19.30 meters high and measuring 9.55 meters across. Its thick walls of 2.40 meters. Battlements with garnish the top; he remains in the south and west, some of which date from the original construction. It is also pierced couleuvrinières referred to Phillips. Today, hoardings, like the battlements and steep roof, were reconstituted. The fortified house undergoes transformations in the sixteenth century; it develops new parts, the keep is seen attached to a large tower with a spiral staircase, and flanked by a rectangular main body. Access to the first floor of the house by the staircase in the large round tower, not exceeding it, standing in the angle between the dungeon and the home. The door to the stair tower and a dungeon window, can be dated to the late fifteenth or early sixteenth. The angles and the keystones of the arches, like the jambs of doors and loopholes are made of pebbles from the Isère, drowned in lime mortar. Inside, one can see a vaulted basement room and a room called the "court" which has a French ceiling, the beams and joists are molded. Traces of a round tower, remain on the right of all, likely vestige of the enclosure.