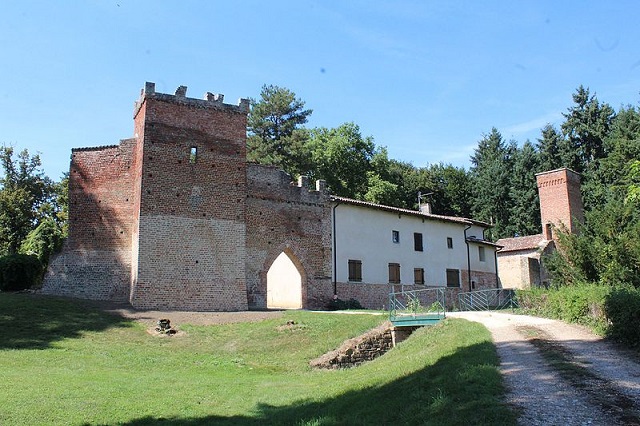 Location: L'Abergement-Clémenciat, in the Ain departement of France (Rhone-Alpes Region).
Built: 14th century.
Condition: Ruined.
Ownership / Access: Chabeu Family.
Notes: The old town of Bourg is a medieval site which stands in the commune of L'Abergement-Clémenciat in the department of Ain in the Auvergne-Rhône-Alpes region. In the 21st century the castle of the Abergement remains only ruins. One can see the remains of the fourteenth-century walls built by the Chabeu. The medieval site is classified as historic monuments by decree of 18 November 1994 and registration on 22 June 2015.In 1250, it is mentioned in a pouill of the diocese of Lyon of the Abergement. In the fourteenth century, the Chabeu, lords of Saint-Trivier-en-Dombes (Saint-Trivier-sur-Moignans), who succeeded in the area to the family of Clémenciat establish a new fortified site, the Abergement or the Old Town , Near the old parish center. In 1304, Jacques de Chabeu was lord of the Abergement in Dombes: dominus Jacobus Chabues, miles, and paid tribute to the Church of Lyons. In 1338, the son of Agnes de Chabeu ceded the castle with his moats and barns and the seigniory of Abergement to Galois de la Beaume, lord of Montrevel-en-Bresse, vassal of the lords of Beaujeu. In 1342, William of the Beaume pays homage for the castle of the Abergement to the count of Savoy. In 1372, the sire de Beaujeu (châtellenie de Thoissey) and the count of Savoy (châtellenie de Châtillon) then disputed the seigniory of the Abergement.The site of the Old Town is in the form of a fossoyed oval measuring about 190 × 130 meters. In this one stands three elements: in the north an artificial hillock of circular form measuring at its base 45 meters in diameter, which dominates of approximately 6 meters of height a platform. The latter measures 70 × 50 meters and is adjacent to the south side of the abutment. Finally, to the southeast of the site a second platform occupies the remaining surface. It adopts a crescent shape for a length of 140 meters and a maximum width of 40 meters.